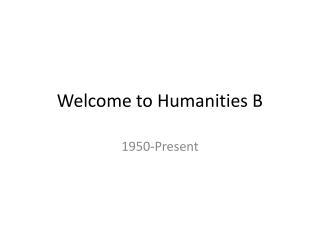 Welcome to Humanities B Welcome to Humanities B

SCULPTURE - . introduction to humanities the humanities through the arts by f. david martin and lee a. jacobus. sculpture

SPSS Introductory Workshop - . humboldt state university may 6, 2011. sponsors. and the http://www.ssric.org. college of

Edward Said on Colonialism and ‘Othering’ - . who was edward said? - very influential writer on colonialism. - a

Historical Development of Humanities - What is humanities? a group of extensive disciplines (such as arts, art

TU 110 Integrated Humanities Introduction - . ask yourself these questions…. who am i? what religious or moral beliefs