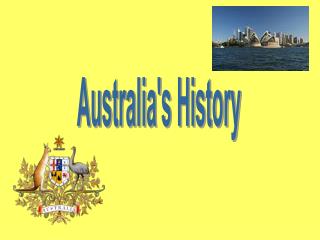 Australia's History. History. History of Australia began when Dutch explorers first came to the country in 17 th century. Indigenous Australian are the first human inhabitants of the Australian continent and its nearby island. Federation in 1901.

Australia PowerPoint - . by luka babich. western australia. the black swan has been used as the emblem f or western