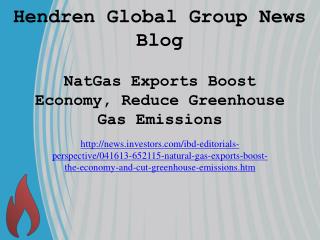 NatGas Exports Boost Economy, Reduce Greenhouse Gas Emissions http://news.investors.com/ibd-editorials-perspective/041613-652115-natural-gas-exports-boost-the-economy-and-cut-greenhouse-emissions.htm hendren global group news blog American consumers and businesses are currently reaping a windfall from the lowest natural gas prices in years. Cheap gas has reduced heating and electric bills for millions of households, while industries using natural gas as a feedstock or boiler fuel have realized huge production cost savings. At the same time, however, $4 gas at the wellhead, though double last year's price, has caused many drilling companies to reduce production and move their rigs to more profitable oil plays. As with all commodities, the price of natural gas is determined by supply and demand. Today the supply is abundant, a consequence of the shale gas revolution, while demand is muted due to a sluggish economy. Because of America's large and growing reserves of natural gas, potential supply will exceed anticipated domestic demand for many years to come. Big Market Indeed the Potential Gas Committee, a coalition of utilities and production companies, recently boosted its estimate of recoverable reserves by 26% to 2,384 trillion cubic feet — an amount equivalent to 90 times last year's consumption. Though domestic demand for gas may grow only slowly, there's a huge global market for the commodity. With Japan retreating from nuclear power after the Fukushima accident, its need for gas to generate electricity has risen exponentially. Because Germany is also planning to phase out nuclear power over the next decade, that country's demand for natural gas will escalate as well.China and Korea are also expected to be huge gas importers for the foreseeable future.

Best inbound marketing blog posts 2016 - Http://bit.ly/best-inbound-blog-posts the results are in and the people have

The Prospective Boost.Lexer Library and its Integration with Boost.Spirit - . ben hanson hartmut kaiser

Disassembling for Fun - . jason haley . who is this guy?. certifiable (mcsd.net certified that is) blog –

Global Politics - Chapters 1-3 chapter 1 introduction: into a new country “global politics is a complex congruence of

http://www.powershow.com/ - Depression is a terrible psychological disorder and has taken heavy toll on the life of 6.7 %