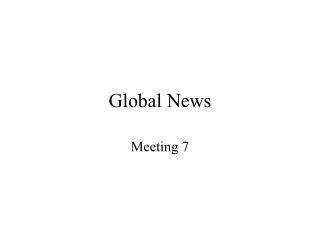 The Squadron Meeting - . cadet joshua pravel ots spring 2011. overview. before, during, and after the meeting meeting

4 th WP4 Beta-Beam Meeting - . welcome to the 4 th wp4 beta-beam meeting at the fiap building in paris the meeting room

Welcome To The Meeting! - . once everybody is seated, i will show our agenda!. agenda:. welcome to the thanksgiving Attending a Meeting - . via the web app. even if a person doesn’t have lync installed on their computer, they can still

CONDUCTING AN EFFICIENT MEETING - . content:. characteristics of effective meetings goals of the meeting chair agenda and

Orientation Meeting #4 - . agenda. opening. welcome!. make sure you have the packet by the door turn in assignments

NOW THAT OUR MEETING IS OVER… - . our meeting is over. god was worshipped. john 4:23-24 we prayed, sang and studied

Conducting a HOSA Meeting - . types of meeting. executive meeting of the chapter officers used to plan for the regular