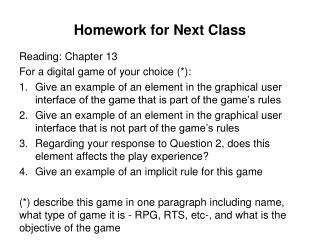 Homework for next class - . research topic: ophelia. bring in notes of what you learned about ophelia (at least 20

Homework (due next class): - . 12 vocabulary sentences (one for each word) greek gods and goddesses quiz next class. take

Assignment for next class - . correct data table and graph for your class/hour trendline , equation, and r 2 value

Next Class - . final project and presentation prepare and email me the ppt files 5-7 slides introduce your problem (1-2

Next class: - . city and country: size and location of cities real and imagined experience class differentiated

Homework for next week – P1 Thursday - . i will put this powerpoint onto smh so you have all the information about this

Fox Class… Homework - . after reading through the following slides, you will write a diary entry from the view of a n

Rethinking Homework Next Steps… - . tying it all together. our

Before next class - “we found increased student attendance, higher engagement, and more than twice the learning in the

Homework: Complete a typed, MLA draft; PEER EDIT NEXT CLASS - . the samurai’s garden essays. hook (avoid you and i) ;

WARM UP Write down your homework assignment due next class (both 1 &amp; 2 are for homework) - 1. copy all the

class summary and homework for February 2 - . since we missed 2 consecutive classes, this class consisted of a review and