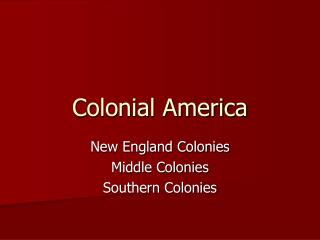 Toward Independence - . chapter 5. read 5.1. introduction. what powers did colonial government have in the 18 th

U.S.HISTORY - . eoct review. unit 1. 1. which of the following statements best explains the dramatic increase in african

Colonial Marble and Granite - , inc. is a one-stop shop for home improvement floorings and décors as well. colonial