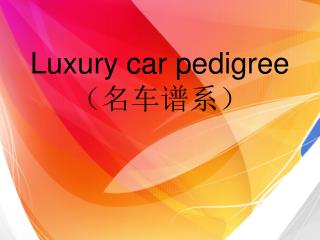 Pedigree Charts - . the family tree of genetics. pedigree charts. i. ii. iii. overview. what is a pedigree? definition

Pedigree Analysis - Pedigree of queen victoria. have you ever seen a family tree… do you have one?? graphic

Making a Pedigree Chart - . a family history of a genetic condition. quick review. genotype = what genes someone has

Pedigree Charts - . the family tree of genetics. what is a pedigree?. a pedigree is a chart of the genetic history of

The World’s Most Exclusive Travel Club - . the lowest prices on luxury hotels, condos, flights, transportation and