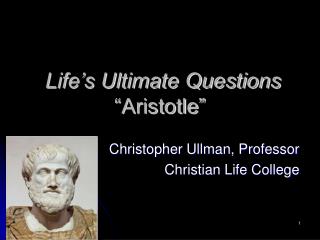 Life’s Ultimate Questions “Aristotle”. Christopher Ullman, Professor Christian Life College. Aristotle (384-322 B.C.). Born not in Athens but in Macedonia Connected to the court of King Philip Studied in Plato’s Academy Tutored Alexander the Great when Alexander was a teenager

Aquatic Ecology Notes - . chapter overview questions. what are the basic types of aquatic life zones and what factors

Slave Trade, Plantation Life and the Presence of African Languages in the Caribbean - . nicole scott. questions . what