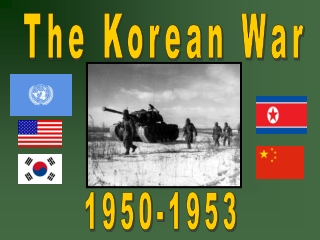 The Korean War. 1950-1953. Background…. Korea had been a unified country since the 7th century. During the 19 th century, Imperial Japan began an occupation of the Korean Peninsula which lasted until the end of WW II. The Korean War - Tensions. during the 1940's, political tensions were building in koreajapan had ruled korea from

The Korean War - . by: josh and rhianon. location of korea. korean war background. after the allied victory in wwii,

The Korean war - . civil war and revolution in china. beginning as early as 1920, communist powers had tried to take

The Korean War - . come in and grab your composition book . warm- up. the truman doctrine and the marshall plan

The Korean War - . why does it matter today?. i. background. during wwii, russian troops occupied n. korea and us

The Korean War - Overview/background:. the korean war was the time when the cold war became a global conflict. in 1945,