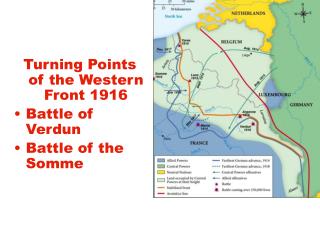 Turning Points of the Western Front 1916 Battle of Verdun Battle of the Somme. The Battle of Verdun was fought between the German and French armies from February 21 to December 18 1916 The German objective was create high casualties and use of supplies to “bleed France white.”

THE BATTLE OF THE SOMME - Created as an educational resource by the porthcurno telegraph museum, as part of the ahrc

The Bloody and Tragic Battle of the Somme - . t h e first day of battle. the 3 major players in this battle were france,

Battle Profile: Second Battle of Ypres and the Somme - . by: karen, sherry, s otheaya. who – germans and the bef

Battle of Somme - . hannah walker. iraqi aftermath she was only six! the woman cried cradling her daughter as she died

The Battle Of Verdun - . by anna, jeremy, sharell , katie, and min sol. cause. the germans wanted paris. they needed to

Battle of the Somme - . new zealanders and the somme. following the evacuation, the nz forces went to egypt for training

The Battle of Verdun - . madison cooley, audrey huang, and kathy

Battle Of Somme - . http://i.dailymail.co.uk/img/galleries/somme/somme2_350x294.jpg. the one day record. main western