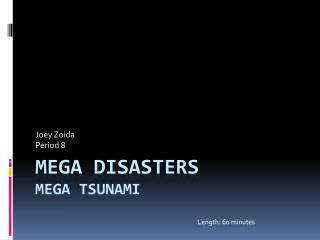 Joey Zoida Period 8. Mega Disasters Mega Tsunami. Length: 60 minutes. The Tsunami. There was a major land slide over 8000 years ago around 6000 B.C. The Tsunami started in Sicily, Italy and made its way to the middle east, 1200 miles away. Mega Rally - . decisions, decisions. do i want to go to this rally? can i fit this rally into my schedule? am i qualified

Mega mouth - . by martin. introduction. mega mouth sharks are amazing creatures. we must keep them safe. it’s our job