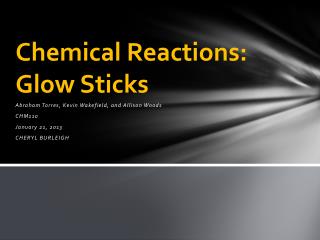 Chemical Reactions: Glow Sticks. Abraham Torres, Kevin Wakefield, and Allison Woods CHM110 January 21, 2013 CHERYL BURLEIGH. Development of the Glow Stick. Modern glow stick was invented by Herbert Richter and Ruth Tedrick . A patent was filed in March of 1973 and awarded in June of 1974.