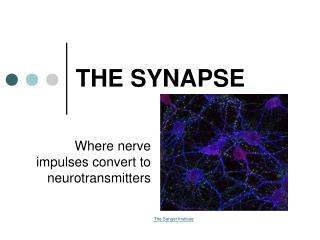 The Sanger Institute. THE SYNAPSE. Where nerve impulses convert to neurotransmitters. The synapse is where the nerve impulse passes from one cell to the next The electrical signal (the action potential) stops and a chemical signal takes over to cross the gap between the cells The Synapse - . a junction that mediates information transfer from one neuron: to another neuron, or to an effector cell

Review the Synapse - . what is a synapse? a synapse is the “gap” between the axon of one nerve and the dendrite of

SYNAPSE - . our second brain: the stomach. by psychology today staff, published on may 01,

Synapse XT - As we age anda do not need to have disease or severe damage, the brain and other organs in the body work

NERVOUS TISSUE The Synapse - . the synapse. area of contact between two neurons or between a neuron and a sensor or an

CNS (SYNAPSE) - Cns (synapse). synapse. at the end of this lecture you should be able to ; synapse and its types

Synapse Directions - . from the desktop select the synapse icon. when synapse opens. this is the screen you will see.