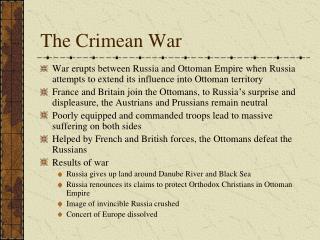 The Crimean War. War erupts between Russia and Ottoman Empire when Russia attempts to extend its influence into Ottoman territory France and Britain join the Ottomans, to Russia’s surprise and displeasure, the Austrians and Prussians remain neutral

Age of Nation States - . origins of nationalism. (this slide is review !!) what is a nation? not a state not a political

Causes of WWI: The European “Powder Keg” - . a century of peace. europe had not seen a prolonged war since the

Ukrainian Immigration To Chicago - . by stephen jones. ukraine. smaller than texas, it is the largest eastern european

The Eastern Question - . the ottoman empire, the crimean war, and a modern war. since the reign of peter the great (r.