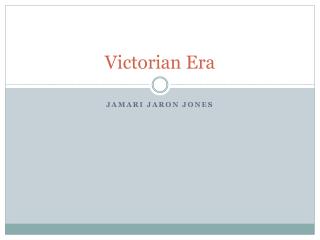 Victorian Era. Jamari Jaron Jones. Idea Of Progress. Progress in this era meant material improvement that could be seen and touched, counted and measured. The E nglish historian, M acaulay wanted the streets cleaned Drained and paved Lighted at night and Patrolled. Decorum and Prudery.

The Victorian Period - . 1837-1901 under the reign of queen victoria. peace and growth. the victorian era was a time of

The Victorian Era - . 1837 - 1901. queen victoria. she had the longest reign in british history became queen at the age

Great Expectations and the Victorian Era - .  “i must be taken as i have been made. the success is not mine, the

Victorian Era - Social-economics . victorian era. queen victoria . ascended to the throne in 1837 at the age of 18 is

Corsets in Victorian England - . a corset is a woman's close-fitting supporting undergarment. it often has hooks and