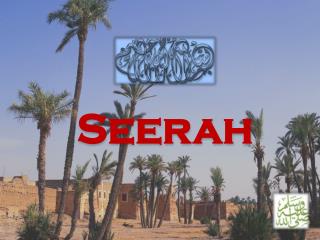 Purpose of Seerah - . first subject of the scholars. - why? 1. seerah was in higher demand ( i.e. people at the time

Seerah of The Prophet Peace be upon him - . muhammad the messenger of allah. the message. the first revelation. read! in

Seerah - . as the revelation b egins. what was to preach. surah al- muddaththir. o you (muhammad saw) enveloped in

Inner dimensions of the Seerah Using the Seerah to build confidence in the 21 st century - . idb leadership programme

Jesus prophet of God - . by robert c. archer. what is a prophet?. “ one who speaks forth or openly, a proclaimer of a

Seerah - Session # 10. seerah. migration of the prophet. 14 th year of prophet hood. when the wicked decision to kill the

Seerah - . session 11. life in madinah. the madinese phase can be divided into three stages. t oo much trouble, conflict