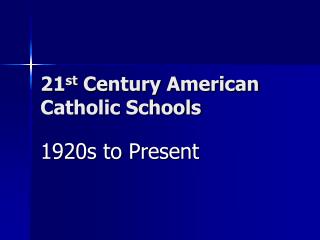 21 st Century American Catholic Schools. 1920s to Present. The origins of American Catholic schools. “The common schools had not been designed with Roman Catholic children in mind.” Historian Neil McCluskey, 1964 “The Great School War” of 1840

21st century-customers-infographic - From boomers & xers to generations y & z consumerography: a snapshot of

Lismore Catholic Schools Office - . the integration of the australian standards for teachers and the contemporary

CREATIVE THINKING - . new science of creativity:. can be learned individual differences all are unique with unique

What Catholics Believe - . &quot; less than 100 people actually hate what the catholic church teaches. thousands of

The Liturgy of the Catholic Church – The Way We Worship - . chapter 6-part 3 and 4 theology ii mr. christopher b.

Catechism of the Catholic Church Biblical Studies - . part one the profession of faith section one &quot;i

SMG Catholic Schools Week - . home of the mighty cougars!. read all about it!. the theme of catholic schools week 2007,