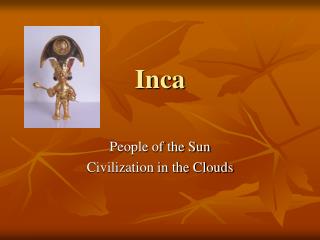 Inca. People of the Sun Civilization in the Clouds. Gate and arch. “Gateway of the Sun” at Tiwanako near Lake Titicaca. Inca neighbor. Inca lived in the highlands of Peru. Empire reached further than any in New world and was as large as the Roman empire. The Inca - . geography of the inca empire. inca empire was located on western side of south america andes mountains home

LSA &amp; InCA in 2014 - . g.kruk on behalf of the inca team. what equipment groups should know about?. issues from

INCA - . what did they invent?. they invent calendar. they have twelve months per year. thirty days per month. every year

The Rise of the Inca Empire - . location . at its height, the inca empire stretched almost 2,500 miles it reached the

The Inca - . the mountainous “sky people”. the basics. as far as the inca were concerned, theirs was the greatest of

Inca - . the inca controlled an empire in the andes mountain region of south america. government. the sapa inca (emperor)

Expansion of the Inca Empire - . adapting to life in the andes. at what elevation might this be? what would the weather