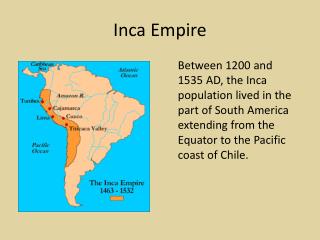 Inca Empire. Between 1200 and 1535 AD, the Inca population lived in the part of South America extending from the Equator to the Pacific coast of Chile. . Geography. Another thing that helped the Inca Empire grow so rapidly was its geography. The empire had three main geographical regions:. Inca Empire - . nick pasinato &amp; titus theis. about the empire. the inca empire ranged from colombia to chile and

Inca Empire - . teacher: rebecca johann. essential questions. what are some similarities/differences between the inca

Inca Empire Introduction - . what do you know about the civilization in perú conquered by the spanish conquistadors?.

The INCA Empire - . by grade 3. education. only the wealthy people had education children were taught stories and poems

The Inca Empire - . presented by reagan walpole. place. lived in the west would be in present day peru, located in south