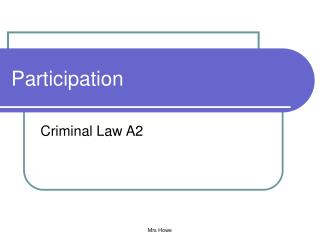 Participation. Criminal Law A2. Lesson Objectives. Classify the different roles a person can take within a crime Explain how the Defendants role in a crime effects how they are dealt with at court. Explain the problems courts have with sentencing secondary offenders. Participation - . voters. want to know what is going on want to know you are looking out for their best interest want

PARTICIPATION - . rationale for participation in development :. emerged internationally when un announced that 1961 –

Political Participation - . wilson 8a. objective questions. who governs? . to what ends?. how did the framers of the

Class participation! - . what is one belief that has helped make you successful? who influenced this belief?. the career

Participation Points - . 5 points possible for each week= 1 point per day if you do not fill out your agenda you will