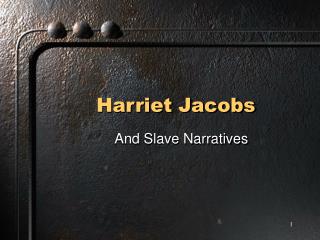 Harriet Jacobs. And Slave Narratives. Slave Narratives. Written from the wealth of experience Bridged the gap between fiction and truthful narratives The question of authenticity Some authored by abolitionists with only a bit of input by former slaves. Anti-Slavery Writers.

The Hiding Place in the Roof - . stories of escape ii: harriet jacobs. in her own account of her life story, escaped

Reflection of Me - . tamara steele. the symbols of my life. child of god. appreciative of my legacy. successful career.

Harriet Jacobs - . harriet jacobs was born into slavery. she is fortunate to be surrounded by her grandmother, brother,

Harriet Jacobs - . born a slave in edenton, nc, 1813. she worked as a domestic slave. sent to her mistress’s niece. her

Underground Railroad - . vocabulary. abolition: the movement to end slavery abolitionist: a person who believed and

Slave Narratives and the Writing of Frederick Douglass - . importance of slave narratives in united states literature.

Harriet Jacob's Incidents in the Life of a Slave Girl - . lecture 3: what our towns say about us. how do our towns