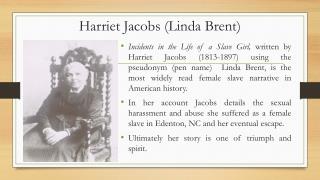 Harriet Jacobs - . born a slave in edenton, nc, 1813. she worked as a domestic slave. sent to her mistress’s niece. her

Harriet Jacobs - . harriet jacobs was born into slavery. she is fortunate to be surrounded by her grandmother, brother,

Incidents in the Life of a Slave Girl By Harriet Jacobs

Harriet Tubman - . by: america ceballos. introduction. have you ever risked your life for the people you love? imagine