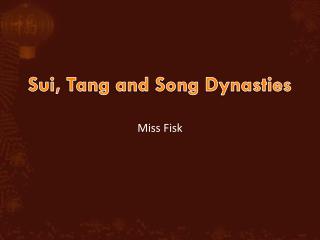 Sui, Tang and Song Dynasties. Miss Fisk. Sui Dynasty. Yang Jiang (Sui Wen Di): The First Sui Emperor. Sui Wen Di, who had been a leader of the Northern Zhou, Went on a mission to unite China and reigned from 581-604 AD. His capital city was Chang’an . Major Accomplishments: Aspects of Lyrics/songs - ... lyrics. theories about songs. in the beginning was the. and the song was ... in

2013 The Last of the Chinese Dynasties and Arrival of Europeans - . weaknesses of the qing dynasty and how the europeans

Give Your Science Teaching A(nother) Good Kick In The Arts Poetry, Music and Song in the Physics Lab - . presented by

Revelation Song - . worthy is the lamb who was slain holy, holy is he sing a new song to him who sits on heaven's mercy

Unit 5 The Tapestry of Friendship - . i. introduction. do you keep in touch with your childhood friends? what do you keep

Song of the U. S. Presidents - . washington, adams jefferson, madison and monroe. these are the u.s. presidents all lined

JUST NOUNS ! Song - . just nouns…. not articles or adjectives. just nouns. not verbs but only words that mean a person,