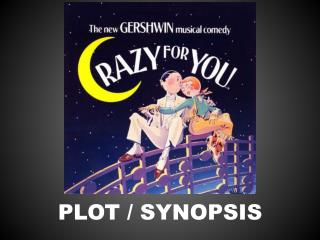 Plot / Synopsis. We Begin Backstage at the Zangler Theater in New York in the 1930s, the last performance of the Zangler Follies is wrapping up for the season. Tess (Dance Director ) is dodging the advances of the married Bela Zangler .

Capitalism - . a love story. before viewing. examine the content on slides 3-10. plot

How to write a synopsis - . there are five things you need to include in any synopsis 1. the setting -- specifically

Writing a Good Plot Synopsis - . in a plot synopsis, you typically need to tell your reader the following:. conflict : in

Elements of Literature - . plot – the events that occur in a novel, short story, poem, or play. setting – where and

Plot - . more than what happens…. plot is how the author presents ideas for the reader. the author guides the

Objective Summary - . word of the week. definitions. objective summary is . . . a succinct, accurate description, in

Hansel and Gretel An Opera by Engelbert Humperdinck - . synopsis. a synopsis is a brief summary of the plot of a story if

Plot Summary - . father gabriel ascends the mountains of brazil to bring christianity to the natives. he is successful