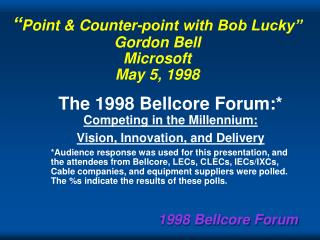 “ Point & Counter-point with Bob Lucky” Gordon Bell Microsoft May 5, 1998. The 1998 Bellcore Forum:* Competing in the Millennium: Vision, Innovation, and Delivery

Point - A point is an object with no dimension it is an exact location. a point is named by a capital letter. point. a.

Literary Terms - . for frankenstein by mary shelley. point of view. the point from which the story is told. usually the

The determination of point groups of molecules - . two σ v but no σ h mirror planes means point group is c 2v. only one

July 16, 1998 Gordon Bell Microsoft Corporation - Six future challenges: 50 years after the celebration of the birth of

More on constructors, destructors - All the examples that follow will be based on this simple class definition: class