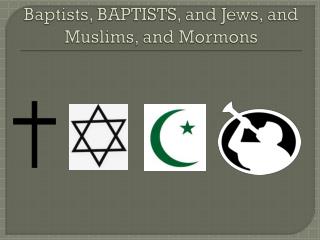 BAPTISTS AND MISSIONS - . baptists and missions. introduction a. a missions-minded people b. a definition of missions c.

Baptists and Catholics - . christmas instituted by

Baptists: Present and Future - . baptists: present and future. introduction a. content b. difficulties c. a word of

SOUTHERN BAPTISTS and the COOPERATIVE PROGRAM - . 16 million people 50,000 churches 173 years. who we are. the

C onnecting Alabama Baptists to all that Baptists do together in our state, - Nation and world. to subscribe, fill out

The Baptists &amp; The Methodists - . helping to define the nature of salvation. baptists - baptism in the bible.