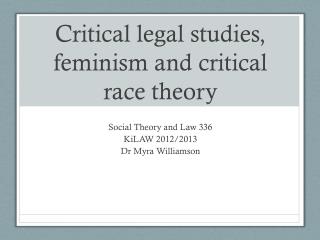 An Introduction to Critical Theory - . or, how there can be many possible readings to a text! (accompanies critical

Introduction to Critical Race Theory (CRT) - . english 10b spring 2013. what does race have to do with it?. when were you

Critical Race Theory and African American Critical Lens - . mr. whitener. what is it?. crt is born out of a postcolonial

Marxism-Economic Analysis and Feminist Jurisprudence - . marxism: “an economic and political theory that states that