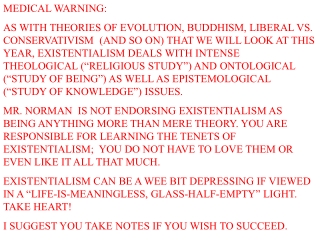 MEDICAL WARNING: AS WITH THEORIES OF EVOLUTION, BUDDHISM, LIBERAL VS. CONSERVATIVISM (AND SO ON) THAT WE WILL LOOK AT THIS YEAR, EXISTENTIALISM DEALS WITH INTENSE THEOLOGICAL (“RELIGIOUS STUDY”) AND ONTOLOGICAL (“STUDY OF BEING”) AS WELL AS EPISTEMOLOGICAL (“STUDY OF KNOWLEDGE”) ISSUES. Tuesday - . year 12 accounting. cash journals. warning…warning sac!. thursday p3? you are now in vce. if you are absent

WARNING - . this content may be found shocking or inappropriate for some viewers. proceed with caution. job

The Dot Game Analysis - . homework. make a warning sign about the atomic age from pgs 523-525: each diamond-shaped