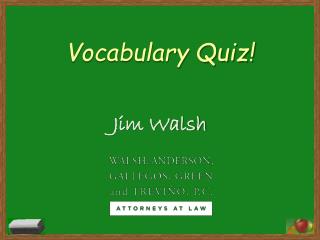 Vocabulary Quiz!. Jim Walsh. Failure to Train. Why you did not make the Olympic team. What happens when you get to the depot too late. A legal theory designed to make employers liable for injuries caused by their employees. What happens when people are playing with their devices Vocabulary Unit 3 - . quiz answers- practice context clues. 1. you could have indicated frankly what you thought was

BR 3: vocabulary review 1/9/14 - . identify the following vocabulary words by filling in the spaces. copy the definitions

Objective - . student will define 5 new vocabulary words from the job application. students will be able to write 9