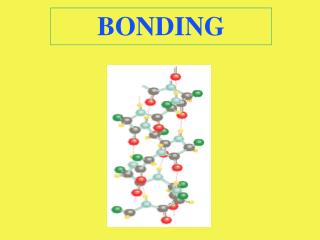 BONDING. REVIEW OF IONIC BONDING. Occurs when a metal transfers an electron to a nonmetal forming a charged particle . Intermolecular forces are Electrostatic Naming: Group IA,IIA,IIIA metals to nonmetals - Name the metal then the nonmetal with ‘ide’ ending.

Lecture 15 February 8, 2010 Ionic bonding and oxide crystals - . nature of the chemical bond with applications to

Chapter 6 -Chemical Bonding - . batrachotoxin. a steroid alkaloid derived from skin secretions of the phyllobates and