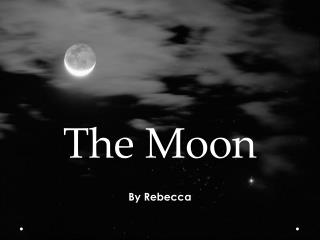 The Moon. By Rebecca. The Moon is orbiting at about 2,300 miles per hour. The Moon is slowly drifting away The Moon looks the same size as the Sun The Moon makes 1 rotation and completes a revolution around the Earth every 27 days, 7 hours, and 43 minutes.

The Moon - . the moon is earth’s only natural satellite the moon orbits/revolves around the earth it is believed that