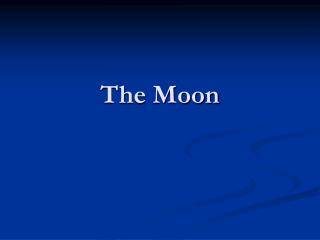 The Moon. Moon. Any natural satellite that orbits a planet is called a moon. We call our moon Moon. Moon. Our Moon takes about 27 1/3 Earth days to revolve around our planet once. As it revolves we only see one side of the Moon. Moon. Catalyst (5 minutes) - . about how long does it take for the moon to go from one new moon to the next new moon? how much

The Moon The Moon - . a mystery by: tess bainbridge. what is t he moon?. the moon was made about 4.5 billion years ago

The Moon - . by rebecca. the moon is orbiting at about 2,300 miles per hour. the moon is slowly drifting away the moon

Moon Phases - . the revolution of the moon around the earth causes the moon to appear to have phases . why does the moon

Affects of the Moon - . moon phases. moonlight is really light from the sun reflected by the moon’s surface the amount

Phases of the Moon - . by: jefferson, lizzie and oscar. new moon. the new moon looks like a black hole. it is all black

Moon Phases - . description of each . this is when we don't see any reflected sunlight on its front face, so it looks

Moon Phases - . by: chance cornett. new moon nueva luna. you can not see a new moon in the sky at night. waxing crescent

Cycles of The Moon - . chapter 3. the motion of the moon. what direction does the moon move in the sky? east… about

Cycles of The Moon - . chapter 3. the motion of the moon. what direction does the moon move in the sky? east… about

THE MOONS - By trae and courtney. the moons. earth’s moon. the moon is earth’s only natural satellite!! the moon was

The Moon - . exploring the moon. satellites are used to identify lunar features and resources there is an abundance of

Earth’s Moon - . key concepts what features are found on the moon’s surface? what are some characteristics of the

The Moon - Chapter 15. the moon. phases of the moon. the moon rotates once on its axis in the same amount of time as it

Phases of the Moon - . the changing appearance of the moon over the course of a month results from changes in the