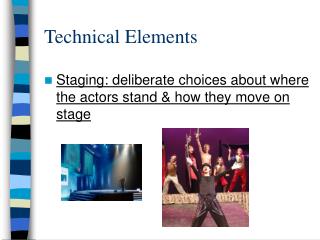 Technical Elements. Staging: deliberate choices about where the actors stand & how they move on stage . Sound. effects an audience hears during a performance to communicate character, context, or environment. Lighting.

Elements of Process Safety Management - . a review of the 14 elements. elements concerned with evaluation of progress

Elements Of Drama - . english ii. learning objective : we will identify and describe the function of various dramatic

Elements of Drama - . plot or story line. every story must have a beginning… middle… end… don’t

Literary Elements of DRAMA - . by: molly craig. drama is. the art of composing, writing, acting, or producing plays; a

Dramatic Elements Premise - . when you write a story it needs to be about something. that something is the premise.

Elements of Drama - . today you will:. learn vocabulary to use in discussing drama learn to recognize the elements of

Technical Style: Punctuation - . unlocking the mysteries!. the punctuation you use most: commas , semi-colons ; colons :.

The Structures and Purpose of Drama/Theatre - . 1.1 what is drama?. theatre is the performance of drama by live actors

Oral and Written Technical Presentations - . susan t. brown, ph.d. university of hawaii at manoa. what we will go over

Technical Theater: Introduction to Sound and Effects - . part i: the basics. what is the purpose of sound design? what