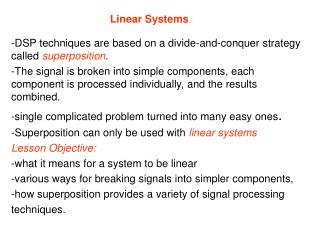 Linear Systems. -DSP techniques are based on a divide-and-conquer strategy called superposition . -The signal is broken into simple components, each component is processed individually, and the results combined. -single complicated problem turned into many easy ones .

Solving Linear Systems of Equations - Calculator Methods - . consider the following augmented matrix. the rows can be