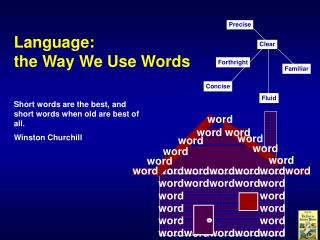 Natural Language Processing COMPSCI 423/723 - . rohit kate. syntactic parsing. most of the slides have been adapted from

August 21, 2008 - . bell ringer: “the most beautiful word in the english language is cellar door .” joseph conrad,

Foundational Skills 2 - . phonics, word recognition and fluency. on the road to reading…. based on lane, 2006, cited in

The semantic mirror - . how the words in a language are translated reveals something about the semantic properties of the