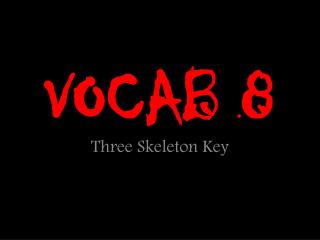 VOCAB 8. Three Skeleton Key. MONOTONOUS. Monotonous ( adj ). spoken in one tone; boring, repetitive Well, one does have a few in thirty-five years of service in the Lights, although it’s mostly monotonous routine work – keeping the light in order, making out the reports. Vocab 8 - . acumen -n. quickness and keenness of judgment. you can have acumen in a variety of things. to be ceo you must

Vocab Unit 8 - . abstract - adj. not concrete; theoretical numbers are abstract, but they can be represented by symbols.

8 th Vocab - . words from greek and roman gods. talk to your partner…. 1. explain what you think the words myth and

Vocab Unit 8 - . accel 12. aberration (noun). departure from what is proper, right, expected, or normal; a lapse from a

Vocab Week 8 - . quell. to put a stop to something like a riot, argument, feelings, or a certain behavior. ex: the

Stage 8 Vocab / Derivs - . in your groups, come up with derivatives (not from the book) for:. gladius nuntius pes porta