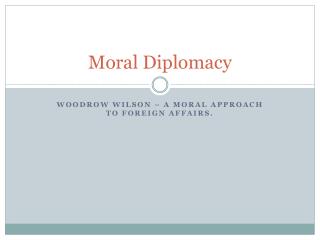 Moral Diplomacy. Woodrow Wilson – A moral approach to foreign affairs. Son of a Preacher Man. “Moral” or “Missionary” Diplomacy. The champion of liberal humanitarian ideals. Wilson believed with religious commitment the US had been created to serve mankind. DIPLOMACY DETERRENCE - You will learn. how international conflicts are prevented and resolvedco-operation among

American Diplomacy - . at the turn of the 20 th century. anti-imperialists disdain for european colonization democracy

Diplomacy - Is it still called that when you threaten countries with war? . diplomacy. latin american independence. by

British Diplomacy - . by bakina marina 9v lyceum №14 teacher: popova e.p . why i have chosen this topic of