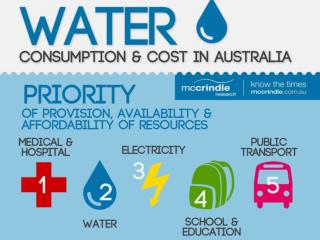 World Water Day is celebrated every year on 22 March to focus the world’s attention to issues surrounding freshwater and the sustainable management of freshwater resources.

The United Nations Conference on Environment and Development (UNCED) recommended this international day in 1992, with the first ever World Water Day celebrated exactly two decades ago on 22 March 1993. This year’s theme for World Water Day is cooperation around water – using water as an instrument of peace by promoting an interdisciplinary approach to sharing this precious resource around the globe.

Here at McCrindle Research, we wondered what Australians had to say about water as a resource priority, water costs, and the use of water per Australian individual.

Our recent nationwide survey shows that 4 out of every 5 Australians say that the cost of water is too expensive. Australians value water provision, availability and affordability less than they value access to medical care, and more than they value electricity.

How does water consumption and cost compare per person across the Australian states and territories? South Australians pay the most for household water bills per person, while Victorians pay the least. In terms of water consumption, individuals in the Northern Territory use the most while individuals in Victoria use the least at just 55kL per person per year (ABS). In terms of water use in the home, Sydneysiders use 27 percent of water outdoors, 24 percent for showers, 20 percent in the laundry, 16 percent for flushing toilets, 10 percent on kitchen and bathroom taps and 3 percent on baths (Sydney Water).

Water consumption in Spain - . some facts about water in spain. use of water per sector: households 13% agricultural

Costs of Research and Research VERA - . timothy j. o’leary adapted from a talk presented by tony decrappeo, council on

HOT WATER CONSUMPTION MONITORING - . symmetron electronic applications. measure in order to be able to manage . via the

Visible water consumption - . a presentation of: amina, alba, alina and lia. structure. germany in comparison with the

WATER CONSUMPTION - . average water consumption in greece. according to a survey demonstrated that the rate of water

SIPP Costs Research - A study of the costs of a selection of ifa-distributed sipps under different investment scenarios.

COSTS OF FINANCIAL INSTABILITY - GDP, INVESTMENT AND CONSUMPTION - . course on financial instability at the estonian

HOT WATER CONSUMPTION MONITORING - . symmetron electronic applications. measure in order to be able to manage. via the