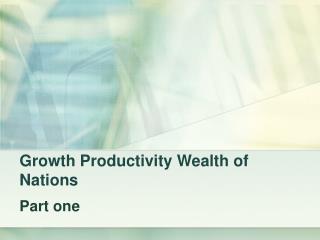 Growth Productivity Wealth of Nations. Part one. Laugher Curve. We have two classes of forecasters: Those who don't know, and those who don't know they don't know. John Kenneth Galbraith. General Observations about Growth. Growth increases the economy’s potential output. Chapter 15 – Nations: Borders and Power - In this chapter, you will learn about political power – the power to

Ecosystem Productivity - . three hundred trout are needed to support one man for a year. . the trout, in turn, must