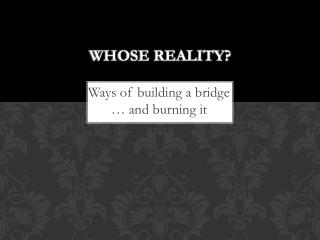 Whose Reality?. Ways of building a bridge … and burning it . Objective. To understand how Death of a Salesman shows us how people construct alternate realities Today is mostly new information – we will apply our understanding in writing tomorrow. You’ll need good notes.