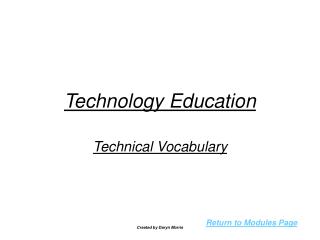 Department of Education - . safe use of machinery in technology teaching. program purpose. to be able to test and

A SEMI-DETAILED LESSON PLAN IN TECHNOLOGY LIVELIHOOD EDUCATION - . prepared by: jake m. quitasol. i. objectives: at the

Turning the Technological Table on Your Students with Their Own Technology - . kmea music technology presentation 2012

THE ROLE OF INFORMATION AND COMMUNICATION TECHNOLOGY (ICT) IN EDUCATION - . bahawodin baha, phd. university of brighton,

Education + Technology → Growth - . the biggest impact will be on knowledge industries such as education and

The Banner System - . an overview. banner is the software. sct is the leading global provider of e-education technology