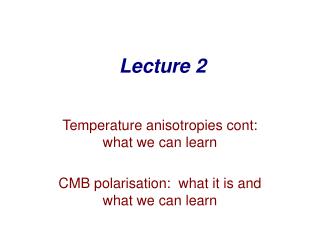 Lecture 2. Temperature anisotropies cont: what we can learn CMB polarisation: what it is and what we can learn. Announcements. Slides from lecture 1 now online (ppt and pdf), slides from this lecture available from tomorrow Deadline for assessment is Thursday 18th March 5pm