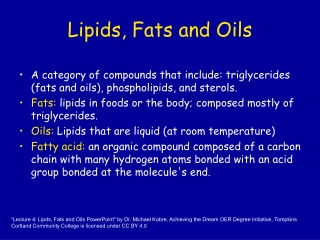 Lipids, Fats and Oils. A category of compounds that include: triglycerides (fats and oils), phospholipids, and sterols. Fats: lipids in foods or the body; composed mostly of triglycerides. Oils: Lipids that are liquid (at room temperature) Lipids - . anna drew with grateful acknowledgement for inspirational teaching received at the school of pharmacy,

Biochemistry - Lipids. lipids are biochemicals which are not water soluble since they more closely resemble hydrocarbons.

THE FATS, AND NOTHING BUT THE FATS - . fats are organic compounds composed of carbon, hydrogen and oxygen. fats belong to

Oils, fats and waxes - . waxes: composed by long carbon and hydrogen chains that are highly hidrophobic. they are

Lipids - . fats, oils, and waxes. types of lipids. 1. triglycerides 95% of all eaten/stored 2. phospholipids soluble in

Fats and Oils - . 1. fat is…. the most concentrated source of food energy there are 9 calories in every gram of fat we