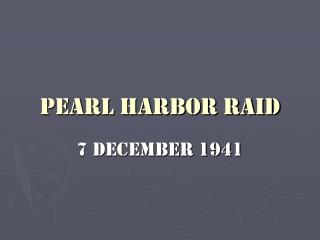 From Pearl Harbor to Manzanar - . this is no drill. dec. 7, 1941: japanese imperial navy bombs pearl harbor, home of the

Pearl Harbor And 9/11 Attack - . a then and now project by omeed daoud and shalah htoo. pearl harbor attacked. december

Pearl Harbor - . by: alvin he. summary a boy named tomi is from a japanese family. his best friend billy plays baseball

Chapter 17 Section 1 Pearl Harbor Instead of fear, the Japanese attack on Pearl Harbor incited anger and pride in many

World War II - . us history. skills work - wwii. you will explain a change or continuity that took place during the war