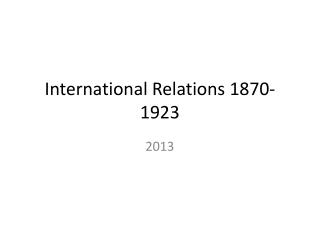 International Relations 1870-1923. 2013. Identify the reasons for, and the effects of, Colonial Rivalry between 1870 and 1911?. Answer both parts of the question Focus on the timeframe British Empire and International Relations Today - Why is it important to start with the empire? influence on: people

The Gilded Age 1870-1890 - . gilded means to cover something of poor quality with gold what does this imply about