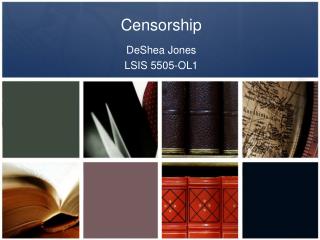 Censorship. DeShea Jones LSIS 5505-OL1. What is censorship?. A change in the access status of material, based on the content of the work and made by a governing authority or its representatives, including: exclusion, restriction, removal, age/grade level changes. (ALA 1996). Propaganda and Censorship in WW1 - . why did the initial enthusiasm for the war die away?. recruitment figures fell the

Czar Resist Change - . alexander ii was assassinated by revolutionaries who were angry of slow pace of reform in russia

Bitcoin - . what is bitcoin ?. a p2p network for electronic payments benefits: low fees no middlemen no central authority

History of Film 4: Scandals and the End of the Studio System - . an age of scandal. famous film quote: “ frankly, my

To Kill a Mockingbird - . webquest: harper lee, conspiracy theories, and censorship. read the article and answer the