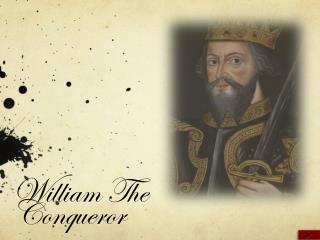 William The Conqueror. Contents. Topics: Title Page Who was William The Conqueror, and what did he do? What lands did he hold and where did he travel? What was his Significance? Where and When were his famous battles ? Bibliography. (Click This Image To Go Back To Contents).

What made William the Conqueror an effective king? - . kept law and order built castles to help control rebels etc.

Kings of England and The Magna Carta - . william the conqueror. -1066: william led an army of norman knights across the

William I William the Conqueror - . became duke of normandy at the age of 8. his parents were never married, so his

What is Feudalism? - . review of last day. william the conqueror vs. harold godwinson at the battle of hastings.

Ancient Rome - . 753 bc. “rome is the conqueror of the root conqueror”. geography. located on italian peninsula

William the Conqueror and the Norman Invasion - . origins. william i was born in 1028 in normandy he was the duke of

Norman and Medieval England - . everything you’ve ever wanted to know!. norman england: 1066-1154. king harold was

Middle English - . the word “knight” did not refer to anything like the picture here until after the norman invasion

The offsprings of William the Conqueror - . william the conqueror. william ii rufus. robert ii corthose. henry i of

The Middle Ages 1066-1485 - . after the norman invasion england ( and the world) would forever be changed… this was

The Medieval Period ( 1066-1485 ) - . a. centralized england's power – he appointed representatives to collect taxes,

The Middle Ages - Norman conquest. william the conqueror defeats the english king, harold, in 1066. harold was the last