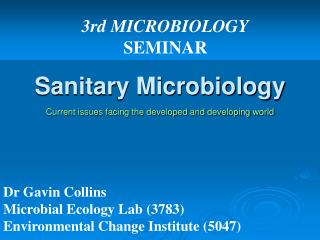 Sanitary System - . by: matthew knuth nic dalle nogare, and zach carini. do we still use them today???. yes. used in

Sanitary Landfills - . municipal solid waste: lesson 3b. objectives. students will understand the basic structure of a

SANITARY ENGINEERING - . planning, designing and installation of system for the collection, conveyance, treatment and

Microbiology - . by: ariel friedman. microbiology. bacteria are an important group of living organisms. most of them are

Microbiology - . microbial metabolism. the metabolism of microbes. metabolism – all chemical reactions and physical