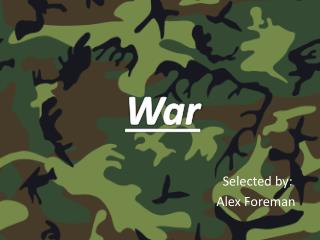 War. Selected by: Alex Foreman. Introduction. When you think of war, what comes to mind?

Take A Look - What Should You Know About Family Laws In Fort Worth? - Family law requires knowledge of a broad spectrum

Printing Lab Results - . sometimes you just need a copy of the lab results on paper. you’ve got a few options for