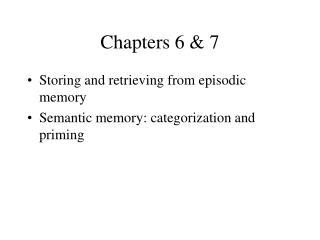 The Hobbit Chapters 6-7 - . out of the frying pan and into the fire!. as bilbo emerges from the goblin caves, he

Chapters 7-8 - . mountains’ tops appeared. dove back with an olive leaf. ark covering removed. came out of the ark.

Chapters 6 and 7 - . crossing the border. photos from: http://www.aliensonearth.com/place/us/ca/tijuana/#section6

Chapters 6, 7 &amp; 8 - . effects of alcohol. even if a motorist thinks they are below the level of legal

Chapters 7–8 - . caesar’s triumph (the perfect tense) the flavor of the perfect the trojan war retold (again!) in

Chapters 6 &amp; 7 - . photosynthesis &amp; cellular respiration these processes are opposites!. the equation for